Yes, yes, I know this poor wee blog has been woefully neglected but I was waiting for something to, y'know, happen that I could blog about. And then, whaddya know, two things happen at once. First thing is that my short story, 'The Pleasure Palace' appears in The Seven Wonders of Scotland anthology published this month.  Second thing is I get tagged by the lovely Lynsey May as part of the Next Big Thing series of blog questions doing the rounds. The deal is you get picked by a fellow writer to talk about your next big project and you then chose five other writers whose work you want to share with your readers. So I thought, might as well kill two birds with one stone...

What's the title of your latest story?
It's called 'The Pleasure Palace'.

Where did the idea for the story come from?
Way back in February those nice people at Birlinn advertised a competition for a proposed anthology called ‘The Seven Wonders of Scotland’. You were invited to submit a two paragraph synopsis outlining your Wonder and if you were fortunate enough to be selected you would then go and write a 5-7000 word story and be given £750.

I wanted to write about a Wonder that would allow me to explore a topic that I feel has been somewhat neglected by Scottish writers:  pleasure. Pleasure with a capital P.  I proposed a huge complex of seven massive glass pavilions called The Pleasure Palace built on Rannoch Moor. Each glasshouse would be  a colour of the rainbow and devoted to celebrating an aspect of Scottish enjoyment. And so, yes, cakes, alcohol and gambling all feature quite heavily.  Oh, and I decided to add a hotel celebrating the music of the Cocteau Twins called the Victorialand  because, hey, seven massive exhibition spaces just didn’t seem extravagant enough.

I packed my synopsis full of stuff because I thought I might as well go mad and enjoy it because there was no danger of me being picked and actually having to write the damn thing…needless to say, the elation of getting the email telling me my Wonder had been picked was swiftly followed by near blind panic.
What genre does your story fall under?
Not sure…I suppose it’s sort of fantasy but not really.  I’m interested in writing about fantastic things that are just on the cusp of believability. One of my greatest compliments came after a friend had read a story of mine called ‘The Smoke Museum’ and asked, ‘Where is it, this Museum?’  I don't think he was stoned at the time...Part of me still suspects that if you followed the right trail of cigarette butts down a certain back street in Edinburgh, you’ll find it....

What actors would you choose to play the part of your characters in a movie?
Well, the main character is called Kirsti and she wears glasses. So probably Velma from Scooby Doo. With hair extensions.

What is the one sentence synopsis of your story?
Principled writer travels to a Palace to discover just how complicated pleasure can be.

Will your story be self-published or represented by an agency?
I’m very pleased to say it’s published!  In The Seven Wonders of Scotland anthology available now from all good bookshops. And if you’ve read this and you’re still swithering, it also features such fine writers as Andrew Crumey, Michael Gardiner, Gavin Inglis,  Billy Letford, Maggie Mellon and Caroline Von Schmalensee.


How long did it take you to write the first draft?


About a month. I’d thought that as it was ‘only’ 5-7000 words and on a topic I’d enjoy writing about, it wouldn’t take too long (that echoey sound you hear is my hollow, bitter laughter). It was the first time I’d effectively been commissioned to write something, that a story of mine would be published that hadn’t yet been written. This added an unexpected level of pressure and somewhat ironically for a piece all about pleasure, I’d often feel sick to my stomach when I sat down to write it. But in the end the main difficulty came about deciding what to leave out. The Palace in rough form could easily have fitted several other glasshouses. To write a novel set there would be bliss.

What other stories would you compare it to within your genre?
The great American writer Steven Millhauser isn’t very well known over here and I’m glad about that. It means I can use him as an inspiration without too many people going, ‘Yes, but it’s awfully Millhauser-like, isn’t it?’ He does a similar sort of thing, writing about massive, labyrinthine department stores and sinister games arcades and circuses (are there any other kind?). I suppose I could call The Pleasure Principle an homage.  Others would call it a rip-off.

Who or what inspired you to write this story?
Mainly the deadline and the offer of a £750 cheque. The less brutally cynical answer is suggested above when I mention that Scottish writing  - aside from the occasional Edwin Morgan poem about strawberries - hasn’t really got to grip with pleasure (I could be very wrong and do feel free to provide examples of happy joyful Scottish writers being happy and joyful in the comments section below).
I’d been listening to a lot of Hudson Mohawke and Rustie, both DJs based in Glasgow, and their music has a mad, daft exuberance that I wanted to try and emulate (be warned, those of a nervous disposition, clicking those links. Their music can leave you feeling like a 12 year old who’s overdosed on Haribo and a 4 hour Power Ranger dvd marathon i.e. over-excited, disorientated and a little bit sick). I don’t think I’ve come even close to capturing their spirit in The Pleasure Palace but it was an interesting experiment trying to try and write about enjoyment and to present it as an unambiguously Good Thing. Sad to say, the end result proves I am too much of a Scot to succeed in such an aim.

What else about your story might pique a reader’s interest?

It features one of these – 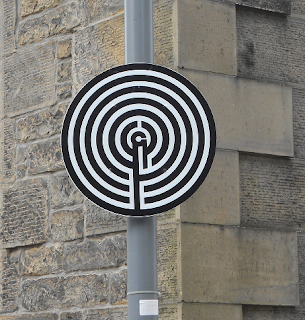 No, not a random street sign, but a labyrinth. And I would love to be able to tell you here what goes on in The Pink Pavilion but then my parents might be reading…


Right! That's me done, just need to pass you on to these very talented folk:

Peter Burnett is one of the most intriguing and one of the most under-rated Scottish writers around. Who else would be genius/mad enough to emulate George Perec and record everything he'd eaten for a year? His new book 'The Studio Game' is fantastic and tells you everything you need to know about modern art but were too afraid to ask. Including an explanation of that Martin Creed room where the lights go on and off.

Richard Strachan was a fellow Story Shopper in 2012, a winner of a Scottish Book Trust New Writer Awards and is the editor of Free State which features fine writing of a psychogeographic nature. He's also a bookseller and would just love it if you went up to him and asked him about a book that was published last year, might have been science fiction with a sort of creamy cover...

Halsted Bernard is the newest member of Writers' Bloc and as anyone who saw her excellent performance at the Writers' Bloc show at Hallowe'en will know, a damn fine addition she is too. Her stories are dream-like and unsettling and as soon as you read one you want to read a whole lot more (if you go into the 'About' section of her blog, though, don't look into the eyes! Look away!).

Andrew C. Ferguson should need no introduction but here goes: poet, musician, novelist and wine connoissieur, what he doesn't know about Common Good Law really isn't worth asking. No, honestly, it isn't.

And there may be a mysterious fifth to add to the list...or there may not. Depends on my powers of persuasion.